The presentation of a 2nd exhibit at ARTERIJA

On June 21st, at V. Kuzmos street between the Muitinės g. 2 and Muitinės g. 4 buildings of Vilnius Academy of Arts Kaunas Faculty, the second exhibit of ARTERIJA titled The Return was unveiled!

On a rainy Tuesday evening, a numerous crowd of visitors flocked to V. Kuzmos street, an iconic location for artistic expression in Kaunas. The first exhibit titled A BLINK, which had been unveiled in January, was replaced by a second, summer-themed exhibit titled The Return. The exhibit started with a piece of body movement art by dancers Dovilė Petkūnaitė and Mantas Stabačinskas. The soundtrack of the performance was composed by Ukrainian artist Volodymyr Antoniv who also played it live at the event. The soundtrack is used for shaping the exhibit-installation itself.

The exhibit was unveiled by the architect, curator of ARTERIJA project, Head of the Architecture Department of Vilnius Academy of Arts Kaunas Faculty, assoc. prof. Rimantas Giedraitis.

The exhibit was also presented by the author Saulius Paliukas himself. He invited the attendees to take interest in the present and ever-changing exhibit, see it during the daytime and then the nighttime and perceive the different purposes and meanings of the exhibit. The author was thankful to the organizers of Kaunas 2022 programme and everyone involved in establishing this new and unique space in Kaunas, the art space and the installation of a second exhibit titled “The Return” on V. Kuzmos street.

We invite you not to be a passerby but rather to peer into the second open-air exhibit in ARTERIJA. The exhibit can be visited anytime as it is open 24/7. But here is our tip: the installation reveals its full potential only in complete darkness. 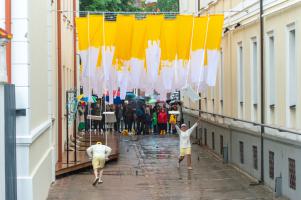 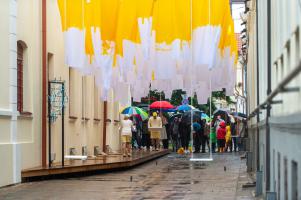 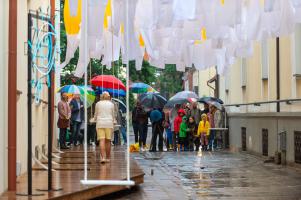 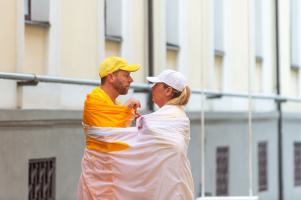 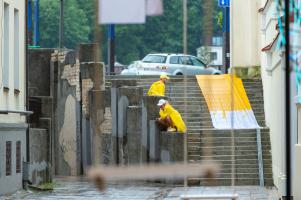 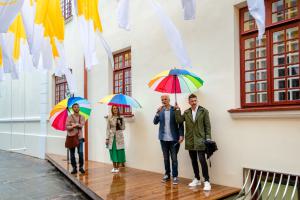 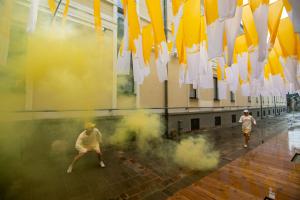 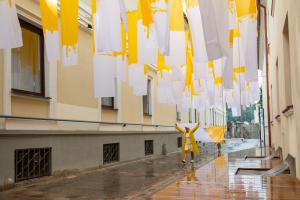 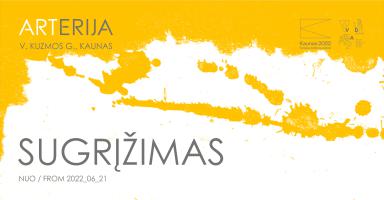